Note: This post is heavily inspired by “iOS versioning” article written by Heath Borders at Twitch.

While the post focuses on automated way to generate build versions for iOS explicitly, described strategy can potentially be applied to other projects which have similar semantic versioning for builds and use git.

While developing onout, I frequently upload new builds to TestFlight to allow test groups to try out new features, confirm fixes or just provide feedback. In practice, dozens of new builds are generated before app is released publicly to the App Store.

In general, it is common to tag the version/build which is being uploaded to the App Store. In iOS case, the version would look similar to this: v0.1.0(1), v0.1.0(2), etc. However, in situations, when there are frequent build uploads, tags will litter git history and make it harder to follow. Furthermore, we are interested in tagging the actual release that reaches the public, like v0.1.0, v0.2.0, etc.

How often do you see git history with the following scenario repeating over and over again:

Release is tagged with specific build version, but the actual commit does not contain claimed change set. Subsequent commit is created to resolve mistake. This does not bring confidence in release management.

Before we look deeper into an automated solution, let us quickly recap how iOS versioning works. Let’s say we have the following version 0.1.0(42), here 0.1.0 represents CFBundleShortVersionString and 42 - CFBundleVersion

On iOS, the build number is a static value within Info.plist file. Every time it is set, Info.plist changes and git counts it as a change. Not ideal, as automatically generating and setting it will yield unstaged changes in git repository. We don’t want that - we can do better.

This is how it looks in onout project:

Remember to add prefix file (in my case Plist/ folder) in .gitignore file to prevent git tracking the file.

Now that we have build settings configured, let’s add the scripts. For which we need 2:

According to the documentation, CFBundleVersion can only contain decimal numbers separated by up to two periods. Furthermore, the build number must be unique with increasing numbers per each CFBundleShortVersionString value. For major version, we will use minutes from Unix epoch, which is unique and increases over time. Then, as for minor version, we decimalize the actual git commit.

Careful with the length of CFBundleVersion as it has not to exceed 18 characters (including dot separators).

We will use git rev-parse --short HEAD command to get seven characters of the commit hash and decimalize it.

Important note: the commit hash can start with 0 and that will cause loss of information - leading zeros are truncated from each CFBundleVersion integer and will be ignored. To avoid this issue, we will prefix each commit with 1. The largest possible value when decimalizing hex value with a leading “1” 0x1fffffff in our case is 536,870,911 (9 characters long). That results in having 18 - (9 + 1) = 8 (18 characters max, 9 for commit decimalized value and 1 for dot) characters left for major version - the time value.

For time value we can use multiple strategies based on how frequently the builds are uploaded. Using seconds based value would be overkill and would require some adjustments as more than 1607898099 seconds have already passed since Unix epoch and that’s more characters than we are allowed to have. More realistic time count would be minutes/hours or even days. While using minutes, we have unique values until 18 February 2160 - equivalent to 99,999,999 minutes since Unix epoch.

version.sh script to generate CFBundleVersion value from elapsed minutes since the beginning of Unix epoch will look something like this:

Beware: ${SRCROOT} is only accessible via Xcode project, thus if you are planning to use script outside Xcode, consider adjusting the path.

If you’d like using smaller values for time, change the division of Unix epoch time to the one that suits you:

And here’s pasrse_version.sh script to convert our decimal back to hex value (it is able to accept full build number that was outputted by the previous shell script or just single decimalized commit value):

To fully integrate version.sh script into Xcode for generating build version, we need to add few adjustments to the project. Since Xcode pre-processes Info.plist as one of the earliest steps of a target build, even before we are allowed to run script in build phases, that’s why we have to use an Aggregate Target as dependency with added Run Script Build Phase that will execute our shell script at the right time.

To solve the issue, simply: 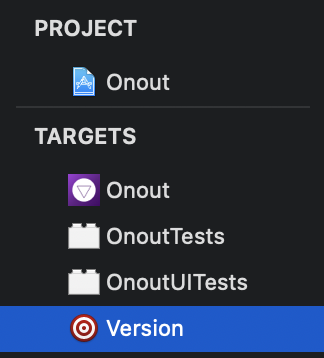 If you try to build the project and build succeeds, Prefix file should be created and hold values similar to this:

Important: BUNDLE_VERSION should be added into Info.plist and associated to CFBundleVersion key as such:

To parse build number back to commit, simply run:

To quickly switch directly to commit as detached head, you can use the following:

The following will parse build number and immediately switch git HEAD to commit represented by the number.

It is important to note that as many techniques, the following has some advantages/disadvantages: